During the second half of the 19th Century, game shooting on many of the larger estates moved from walked up shooting over dogs with fairly modest bags to driven shooting where a line of beaters was used to push the game over standing guns. During the same period, more birds were reared and released into the woods in time for the game season. As a result of this, bags became larger, the shooting possibly became more competitive and there developed a desire among sportsmen to keep a score of the number of game they shot.

Gun implement manufacturers were always keen to produce new products to satisfy the Victorian Sportsman and recognising this new demand began to produce a range of small pocket sized counters to enable a score to be kept. Often the shooter would have a loader or loaders attached to them and these loaders would probably have been given the job of recording killed game using one of the new-fangled counters. These counters or “markers” , as the tools were called in Dixon’s 1883 catalogue, usually had individual dials for different species. Interestingly some manufacturers recognised that the loader using the counter may not be literate and each species dial was made in a different coloured metal so it could visually be identified without the need to read the species stamped on the dial. Unfortunately there doesn’t seem to have been any standardisation between makers on dial colour/ species.

Some sportsmen had an over optimistic view of the number of birds they actually hit and on occasion may instruct their loader to record near misses when they were “confident” the bird would eventually drop hence the nickname for these game markers of “Norfolk Liar”. I am sure this is no reflection of past sportsmen in Norfolk and I suspect the nickname was probably used simply because there were some large sporting estates in that County.

The most prominent British gun implement manufacturers of the last half of the 19th Century were James Dixon & Sons, G. & J.W. Hawksley and William Bartram. They were all based in Sheffield and each of them produced a range of these counters using brass, copper, steel, solid nickel silver (not plated), and very occasionally solid hallmarked sterling silver.

The most commonly encountered game counter is a four dial with dials marked for pheasants, partridges, hares and rabbits. However the customer was given options to have other species and snipe, woodcock, blackgame and grouse are also sometimes seen. In this counter each dial operated on an internal spring and ratchet so it clicked from number to number in a clockwise direction. 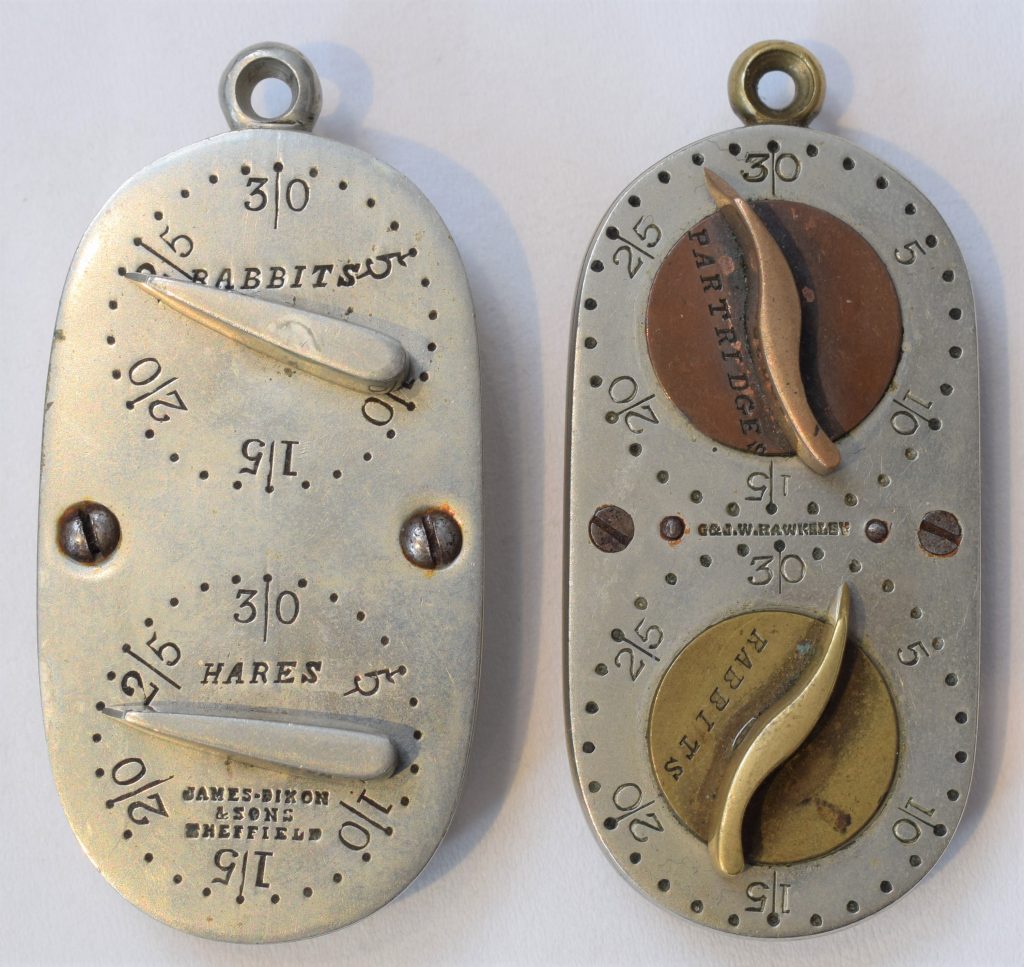 Interesting other variations offered in James Dixon’s catalogue of 1883 include a fisherman’s counter (although it doesn’t show what fish would be marked on each dial) and an archery counter (I can only think the dials would relate to scoring rings on the target). I have never seen either of these in the flesh, but, presumably as they were advertised in the catalogue, examples must have been produced and I would love to see one.

G & J.W. Hawksley also produced a fisherman’s counter and a rifle shooters target counter with four dials: “misses”  “outers” “bull’s eyes” and “centres” but these are extremely rare. I think target shooters tended to use range books to record their scores and so these counters were probably not very popular. 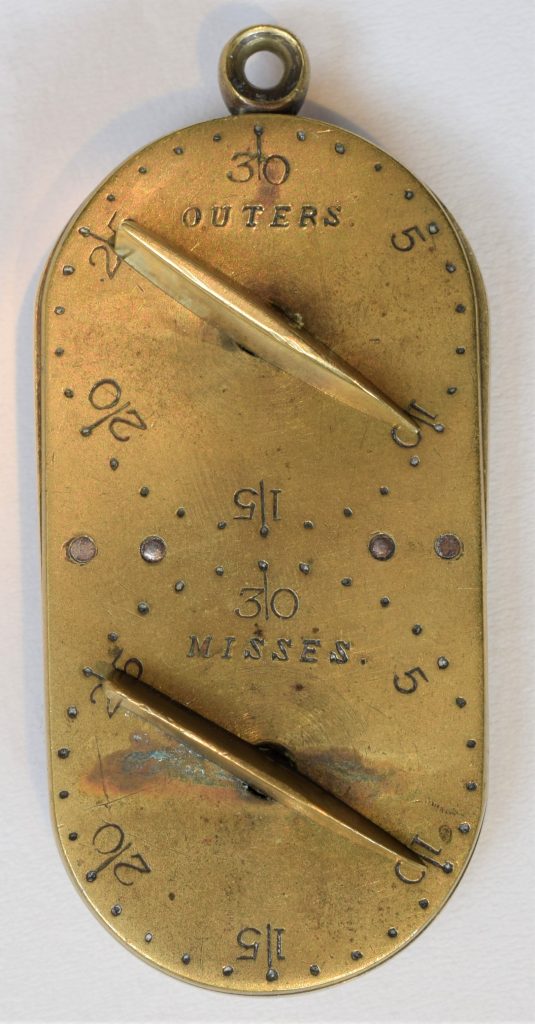 William Bartram & Co. produced a similar four dial counter but with smaller dials. You don’t often come across these so I can only assume they weren’t as popular in the day as Hawksley and Dixon versions. 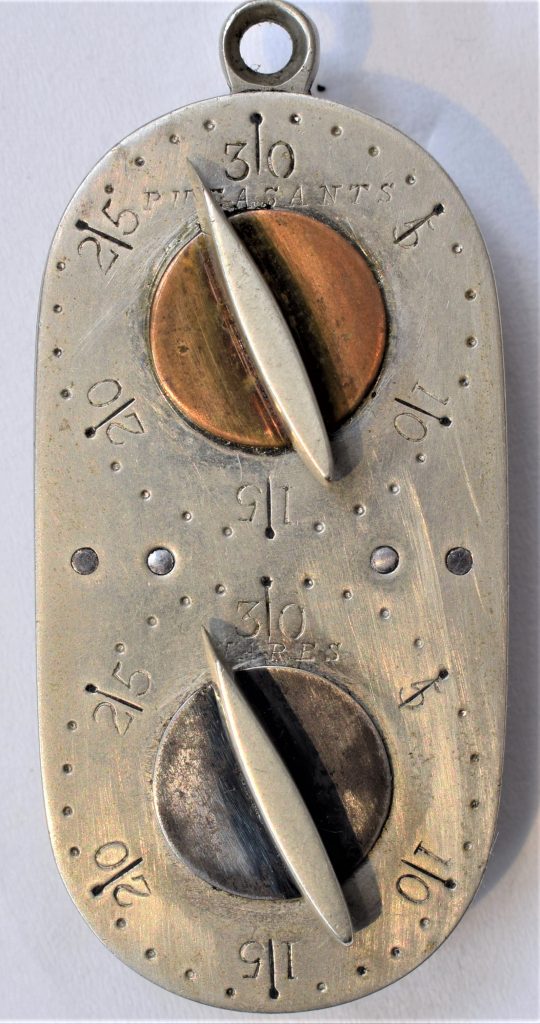 Both Dixon and Hawksley also produced a simple two dial circular counter with long fingers rather like a clock face. Each number had a hole at the edge of the counter and the finger was sprung with a peg at the end which could be clicked from hole to hole. These were a cheaper model (5 shillings each compared to 9 shillings for the four dial) but strangely these are pretty uncommon so presumably the Victorian sportsman preferred four species dials. 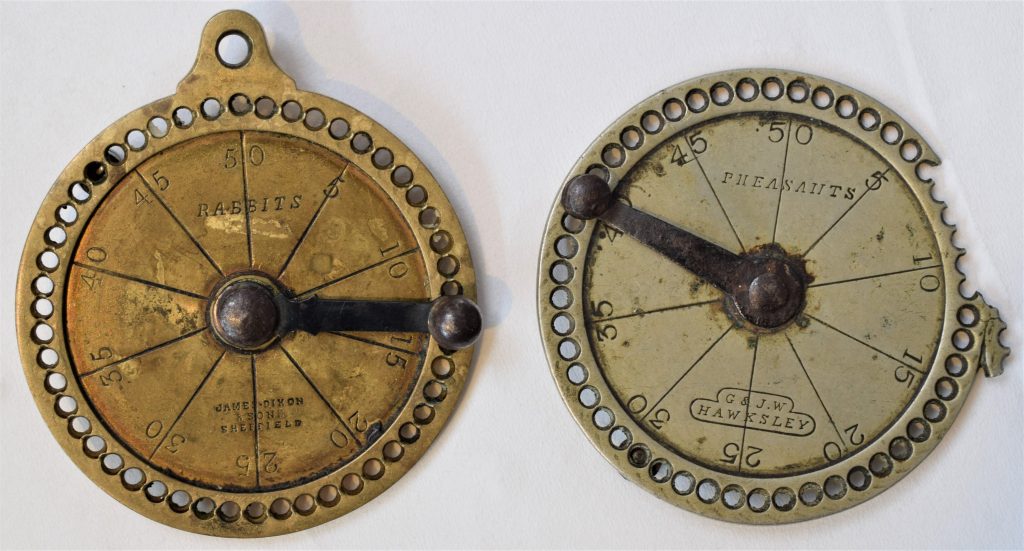 The sportsman that thought he would be shooting a wider variety of game would need a six dial counter and both James Dixon & Sons and G & J.W. Hawksley filled this need. In the James Dixon 1883 catalogue they offered a nickel silver six dial counter at a wholesale cost of 14 shillings each (their nickel silver four dial counters were 9 shillings each). You don’t come across many of the six dials so must assume the higher cost restricted their popularity.

James Dixon also produced a circular game counter with all four “clickers” on one side. These are uncommon.

The circular four dial pattern of counter was also produced combined with a percussion cap dispenser and these are exceptionally rare. I have only ever seen three of these, all by James Dixon and interestingly one was in brass with the species marked in French, so presumably for export. 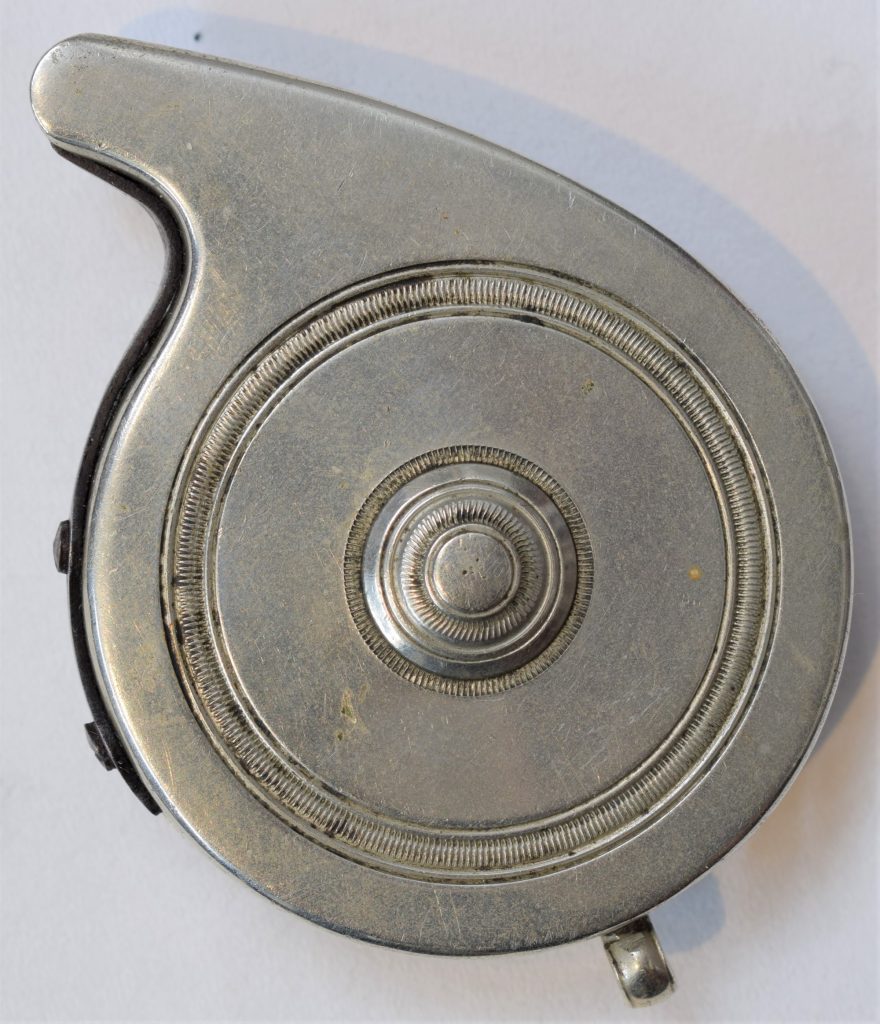 As the 19th Century was nearing its end, driven game shoots became much larger with vast quantities of pheasant and partridge being shot and the game counters we have viewed so far became inadequate as they were limited to small numbers of species shot – usually 20-30. These larger shoots generated a demand for shot counters which could handle much bigger numbers.

In the Dixon catalogue of 1883 they offer a press button operated counter which they advertise as being able to be used unseen in the pocket and can count up to 60. This was the registered design no. 120431 of Charles Maleham who was a gun maker on West Bar in Sheffield, with a London showroom with a number of gun patents to his name.

Each time the button is pressed the dial advances by one unit.

A further development to enable an even greater number of shot birds or ground game to be recorded was a press button counter with a moving central display of the actual numbers. This counter will count up to 999 and could be used as a shot counter (to record the total number of shots fired) or a game counter recording game killed. It is of  fairly robust construction and identical counters (albeit marked with a Royal cipher) are shown in David Bakers excellent book “The Royal Gunroom at Sandringham” confirming their use on the large Royal estates. 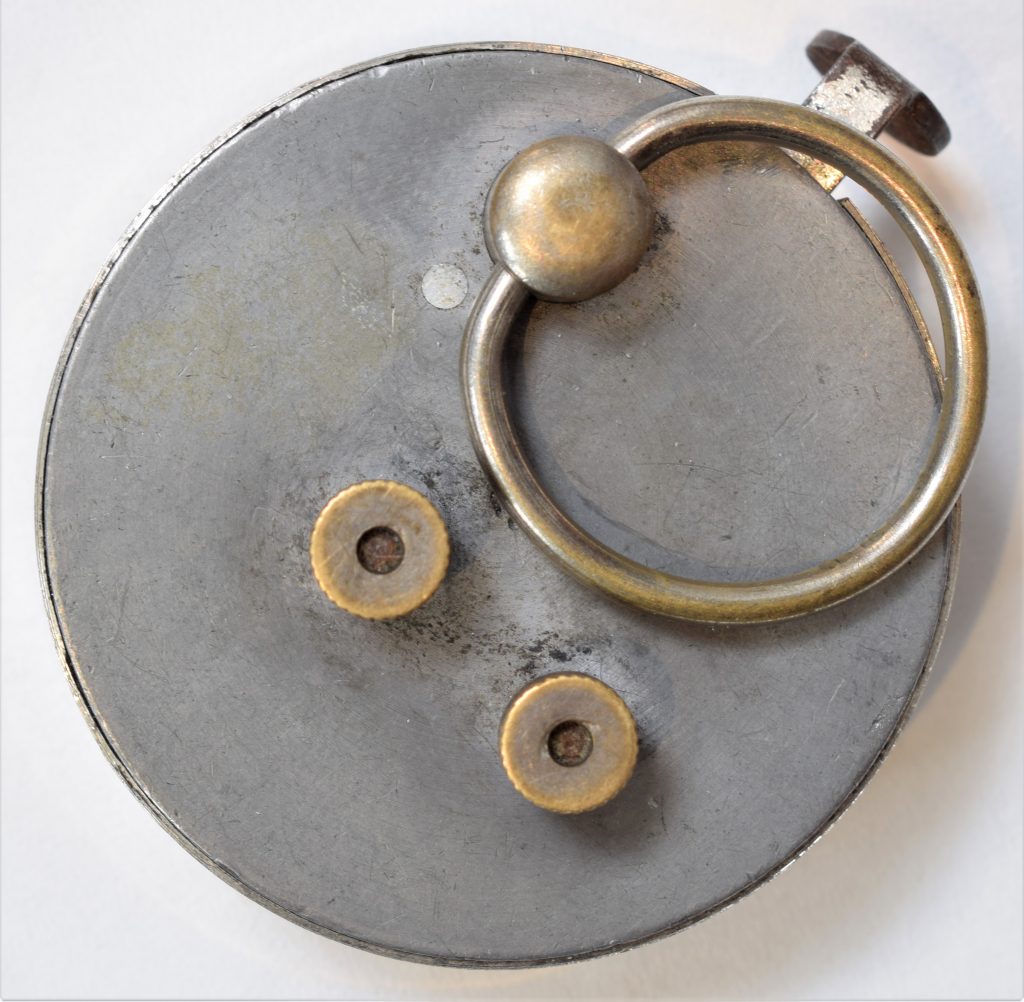 During the first half of the 20th Century a range of game counters was produced by Lightwood & Son of Partridge Works, Price Street, St. Mary’s Square, Birmingham. These counters tended to be cheaper and less well finished than the earlier Sheffield counters and some were still being made into the 1970’s. They were made for use and not as collectables and can still be found for sale at a much lower price than their Sheffield counterparts. In my experience they were not marked with the maker’s name and were all in plain brass.

As you can see game counters provide an excellent field for collecting with a wide variety of models, styles and prices. However, a word of caution…..

In recent years the four dial game counters with two dials on each side have been copied (or faked) in India and on occasion these copies have been sold as originals so the buyer must be careful when viewing four dialers. Fortunately the copies aren’t quite the same as the originals. They are not as well made and the ones I have seen have a small circular base to the turning bar on the dial, whereas in the original the bar is just a straight bar on top of the disc or body of the counter and doesn’t have any reinforcing at the bottom. Beware of counters with famous gunmakers names stamped in place of the Dixon, Hawksley or Bartram stampings as these are also usually fakes or modern copies made in India. The only original counters I have seen with gun makers names have the names stamped or engraved on the edge of the counter. So please do be careful when buying!