One of the common problems facing the Victorian sportsman using a percussion muzzle loading gun or rifle was getting moisture in the powder charge or a blocked nipple with resultant misfires. Similarly if the sportsman neglected to load any gun powder before ramming home the lead ball or bullet (easier done than you might think) the gun couldn’t be discharged. In each case, the solution “in the field” involved removing any blockage and/or adding dry fine gun powder into the breech.

As was often the case, the British gunmakers and gun implement makers recognised these problems as an area in which they could help the sportsman and of course make some money with new products and extra sales.

The most simple little gadget was a steel funnel which screwed into the breech in place of the nipple allowing dry fine gun powder to be added through the nipple hole into the breech. It was intended for use where the powder charge had been forgotten as enough powder could probably be added to blow the ball or bullet out of the barrel thus making the rifle usable again. However this did rely on the sportsman being able to first remove the nipple in the field. I have only encountered this type of funnel as a standard accessory in the cases of percussion rifles made by James Purdey and instructions for it’s use were included in their written directions supplied with percussion cased rifles.  I don’t know whether any other gun makers also supplied similar items, but if so I haven’t seen any. Clearly this could only be used with a rifle which had the same screw thread on the nipple and the funnel so it is not surprising that it was supplied originally with the rifle.

The Sheffield gun implement makers James Dixon & Sons and G & J.W. Hawksley both designed and started to manufacture a range of complete nipple clearing and priming tools which could be used without the need to remove the nipple. These tools embodied a tube with screw off cap to be filled with fine gun powder combined with a spring loaded steel pricker or spike to unblock the nipple and a funnel. The tool was placed on the nipple and the spring loaded end with the filler cap was pressed which pushed the pricker into the nipple and also allowed a drizzle of powder to be released into the funnel and, hopefully, unblocked nipple. As always a range of qualities was produced ranging from lacquered brass to solid nickel silver.

Both Dixon and Hawksley also produced a superior model which they referred to as their their “improved pattern with self acting pricker” and this had the funnel and pricker mounted on the side of the gun powder container. Dixon charged 4 shillings extra per dozen for the “improved” over the basic model.

G & J.W. Hawksley also produced an “improved” pattern primer which looked very similar to Dixon’s tool. I am not aware of anyone taking out patent protection on this primer so the design could have been used by all manufacturers. I haven’t seen any primers marked with other manufacturer’s names but you do come across unmarked examples.

The “improved pattern” of nipple primers were also produced combined with a dog whistle by both Dixon and Hawksley and it was the whistle that unscrewed in order to refill the primer with gun powder. Dixon preferred the whistle in line whereas Hawksley’s version placed the whistle at right angles to the powder container.

Scottish gun makers Edward Paton and Charles Walsh of 44, George street, Perth produced yet another variant of a nipple primer. This had a narrow tube down one side with an internal pricker which was spring loaded. The narrow tube would be placed onto the nipple and when the knurled cap was pressed the pricker went down into the nipple followed by some gunpowder which was released into the narrow tube at the same time. This model can be found in brass and nickel silver. They also made a superior model that had a larger tube connected to the other side of the powder container which contained percussion caps. These were dispensed by a plunger. This is an extremely rare variation of which I have only seen one example. I don’t know the significance of the crown stamped on their primers. As far as I know they were not gunmakers to the Royal Family. 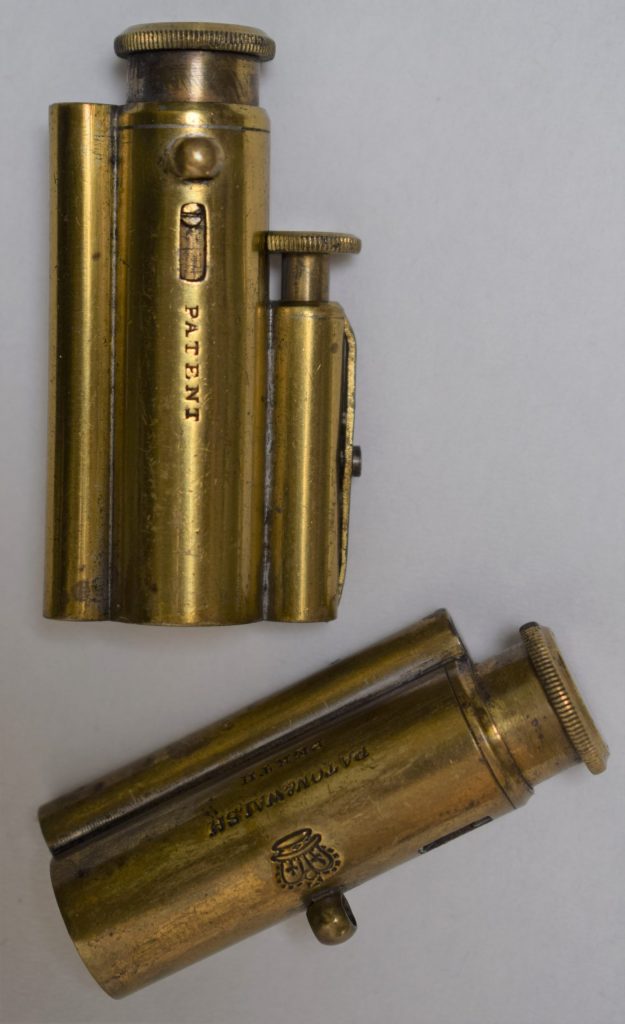 James Dixon manufactured a large range of percussion cap dispensers so why not produce a cap dispenser combined with a nipple primer – well they did! In fact they produced several different models. They combined both the standard and “improved” patterns of primers with their 1846 registered design gravity fed cap  dispensers and their more expensive sprung circular cap dispenser. Examples of all these are now very rare and difficult to find and are definitely ” la creme de la creme” of nipple primers.

This is the range of nipple primers I have come across, but there will no doubt be a variety of other examples and patterns I have never seen. I wonder if any Victorian gun or implement maker produced a nipple primer combined with say a nipple key, or a lock brush. Your imagination can run riot, but if anyone has an unusual model I would love to hear from them.